The following article is from the National Right to Work Legal Defense Foundation’s bi-monthly Foundation Action Newsletter, January/February 2020 edition. The West Virginia Supreme Court heard arguments in this case on January 15 and a decision is expected in the coming months. To view other editions or to sign up for a free subscription, click here. 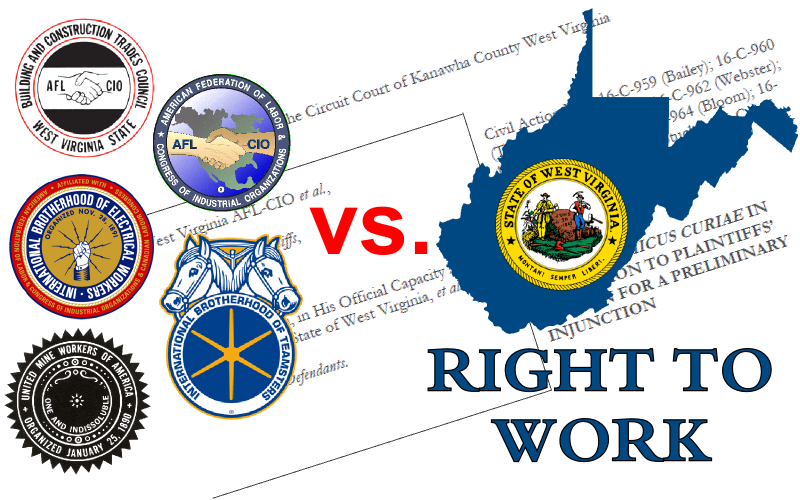 Forced-dues-hungry union bosses have been waging a legal battle to overturn West Virginia’s Right to Work Law since it was enacted in 2016. Foundation staff attorneys have been fighting back by filing amicus briefs in court.

West Virginia’s Right to Work Law succeeds, union bosses could have thousands of independent-minded workers across the state fired solely for refusing to subsidize union activities.

Foundation staff attorneys have filed 10 legal briefs in the multi-year case. The Foundation’s latest amicus brief was filed for West Virginia nursing home employee Donna Harper. Harper, like many other workers in West Virginia, chose not to pay dues or fees to union bosses, which is her legal right in a Right to Work state.

“Union bosses in West Virginia are intent on reclaiming their forced-dues power,” Mix said. “Big Labor is waging this protracted legal battle to return the Mountain State to a time when millions and millions of dollars in workers’ money were seized by union bosses to fill Big Labor’s coffers with forced dues.”

This case is the latest legal battle in the Foundation’s long history of effectively defending Right to Work laws in state and federal court from spurious attacks by Big Labor. Although federal law specifically authorizes states to pass Right to Work laws to protect workers from union boss coercion, union lawyers have repeatedly challenged these laws in an attempt to keep siphoning union dues and fees from workers’ paychecks.